The tow ropes for normal towing are 50m to 65m long and are fitted with weak links at each end. At the glider end, links consist of two brown mitty links, with a breaking strain of approx. 1000lbs (454kg), and are protected by at least one square wear protector. Both must be intact for a safe operation. At the tug end is a white tost link within an aluminium protector, which has a breaking strain of 500daN (approx 500kg or 1100lbs) and protects the tug against fouling on approach to land. For example, wrapping around a tree or other structure on approach. 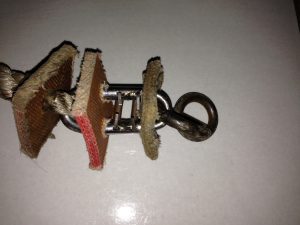 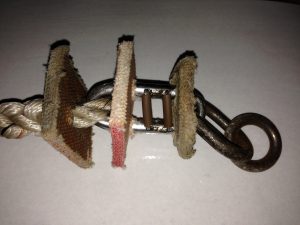 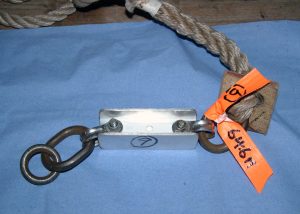 As part of the DI, each tug should have a serviceable tow rope stowed on the floor between the front and rear seats of the aircraft as well as a serviceable one fitted. All weak links should be intact – if not, either reject the rope or replace the link if you have a ‘weak link’ kit on board. At the tug end, ensure that the weak link is clean, not distorted and will slide free in the event of a break.

Serviceable ropes are normally looped and stored on the line at the rear of the hangar. A couple of ropes maybe laid out on the hangar floor ready for use.

Special ropes, such as short ropes, dual-tow rope and extra long ropes will be stored on the left hand side of the hangar and will not be used for normal towing.

Unserviceable ropes, including those with knots in them, should be placed in the box on the floor at the rear of the hangar.

Try and keep the ropes off the tarmaced apron and the perimeter track – vehicles over running the rope cause premature wear. Do not leave ropes out on the field overnight.

If operating from a hard runway, then it may be necessary to wrap the splicing at the glider end with wing tape to protect the splice from the extra wear and tear a runway surface creates.

Note: We are slowly introducing a shackle on each of the rope loops, created by splicing each rope end. This will allow the rope to be reversed and effectively double it’s life before any new splicing is needed. They are not shown on the photos above.