At Dunstable our tow out routes are many and varied. This is a deliberate policy to spread the noise nuisance our tugs cause.

Below are a collection of routes from different runs to illustrate some of the possible patterns. The glider being towed may well dictate a particular route, for example, a soaring pilot will probably want to route towards Leighton Buzzard whereas it would quite acceptable to tow an air experience flight behind the hill and drop overhead. A tug pilot should be endeavouring to route differently on each tow.

The examples are actual log traces displayed on a Sky Demon background, annoyingly there is a diagonal line across them annotated ‘Airway L10 5500+’, which has no relevance to our operation so please ignore it. Equally annoying, Sky Demon doesn’t show the Southern boundary lines that we are familiar with and form part of our Letter of Agreement with LTCC.

If ’26 Airspace’ is available, then full use of that area should be made for tows. It is a lightly inhabited area and a good area to tow.

This first example shows a fairly standard route, towing straight out with a right turn towards the 26 boundary, followed by a standard descent avoiding the villages and joining downwind.

This tow is similar to the previous, but a right turn after release would mean overflying Edlesborough, so after the initial right wing drop a turn to the left has been made. With the additional height loss this involves, a descent path close to the village boundary is required to enter downwind at the correct height.

This tow runs as close as we can to the village of Edlesborough, with the release close to Leighton Buzzard, the subsequent descent then continues around the villages to join on a base leg. This is most suited to gliders that wish to go cross country and is commonly used in grid launches and competitions.

This tow routes left after take-off towards Dagnall. Note the release is close to Edlesborough so the tug has turned left and joined downwind. Often a suitable routing for a low release or a glider pilot wishing to go hill soaring.

This tow has climbed straight ahead then turned left behind the hill to a release point overhead the airfield. The subsequent descent has been made to the North before joining on a base leg. This can be used for any tow where a 2000′ release is required, an air experience flight being an example.

Very similar to the previous tow route except it is probably with a heavier glider and has made use of airspace right up to the Southern boundary before a release over the hill beside the airfield. The descent again goes to the North, this benefits from a descent in a different area to that of the climb.

Again similar to the previous except the descent has been made in order to join downwind. This might suit a tow where the sun is low or in hazy conditions when a better view of the circuit is desired.

Operations on the NE run with a NE wind. The tow routes through the gap over the cricket pitch then turns back over Dunstable once above 1500′ to drop close to the centre of Dunstable. A right hand circuit is a convenient return from here.

This example follows the same initial routing but the release point is on the North side of Dunstable, which requires a left hand circuit rejoin. From here the tug would not have enough height to do a right hand circuit.

This is a 3000 tow with a drop point on the East side of Dunstable, close to the airspace line. An orbit is required to lose height before following a right hand circuit.

This shows a simple 2000′ tow, with release over the A5 followed by a descent downwind to land North East.

This example shows a simple route around the villages with a release point towards Leighton Buzzard, followed by a straight in approach from Edlesborough church. This pattern would be used for grid and competition launches. It would also suit a glider that was planning a cross country flight.

This example shows a 2000 tow to the North, however, the descent routes along the hill into a right hand circuit. It has the advantage of keeping out of the glider circuit.

This example shows a 4000′ tow from the West run. The wind is a brisk Northerly, so initially the tow routes directly to the 4000′ boundary line and 3000′ is exceeded soon after crossing the line. The route then parallels the airspace line with the final 500′ or so away from the line to provide some margin to the boundary given the wind drift back towards it. The return must remain North of the line until passing 3000′ which then leads to a right hand circuit onto the NE run. Overall a thoughtful and efficient 4000′ tow. 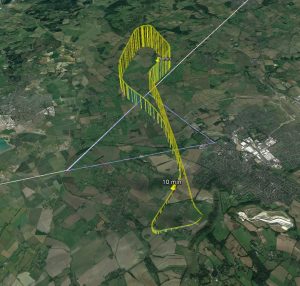 This shows the difference when Luton are operating on “08”, with the Spin Training Area (STA) available giving upto 4000′ in the triangle.