Normally gliders will be two abreast on the ‘pig farm’ side of the the control tower.

Taxi from the pumps along the SW take-off patch, crossing the cables mid-field with a wide left loop around to the launch point (shown in black). Alternatively, taxi along the front edge of hangar ridge and down the slope crossing the cables ahead of the tower (shown in yellow). Be alert for landing gliders and tugs and announce ‘xx crossing cables’ at the appropriate time.

Tugs should be positioned well to the West of the launch point either for parking or completing the engine run-up.

After landing, taxi back to the West side of the launch point and hold until you know which glider is to be launched, then position ahead of it.  If cables are out, after every landing, long or short, return across the front of the launch point so as to be positioned ready to approach the launch point from the ‘pig farm’ side (shown in black), this might involve a 180 degree turn right and another to the left. This will provide consistency and reduce the possibility of the tow rope ending up in front of the tug. Don’t be tempted in to the small space between winch cables and the tower side of the launch point. The exception to this might be a West run grid launch where the winch cables are either not present or have been wound in, where approaching the grid from ‘hangar ridge’ side might be acceptable. With the extra manoeuvring involved on this run be mindful of your tow rope and ensure it can be collected without pulling it close to the nose of the tug.

This take-off run is particularly noise sensitive and direct overflying of the houses on the Tring Road and Wellhead MUST be avoided. This gives three possible take-off paths as shown below. The most Northerly goes very close to or over the winch. The middle option just keeps to the SW edge of the hedge line and routes between the houses in Wellhead and a single house. The Southerly option has a bit more space but goes very close to a Horse Riding school, try and avoid their training arena as well as the buildings.

If taking off on the Northerly route, either aim towards the winch or slightly to the left of it and when airborne and about 50 feet or more, commence a shallow turn to the right to align with the departure route. This procedure is important so as to avoid any housing immediately after take-off. Sometimes the winch may be positioned too far West to do this. If it is, discuss the options with the instructor in charge, ie; moving the winch or just using the other tow out options. The take-off roll should made in such a way as to avoid crossing the cables either normally or in the event of an aborted launch. 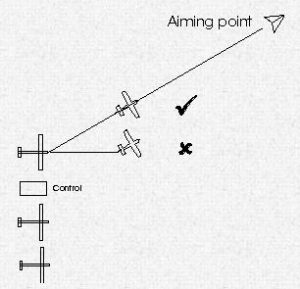 There is a tendency for gliders to align themselves parallel to the winch cables, which implies taking-off along the northerly route. It is important that we cycle through various take-off routes and this may mean realigning the glider before take-off. Some gliders will easily re-align themselves on the take-off run if the tug is properly positioned (see diagram above), but it is generally best to advise the glider pilot of the expected ground run. K21’s can generally cope with misalignment quite well. However, heavy tailed gliders and those that might sit on their nose wheel for some time can not easily do this and must be re-aligned before take-off. These include the ASH25, ASW22, DG500, Nimbus and similar types. Duo Discus and Arcus might have the nose wheel problem.

If taking-off along the most northerly route, a turn once airborne to the north is required to prevent overflying the houses at the end of the airfield. The combination should then continue through the gap between Totternhoe and Dunstable.

If taking off using the other two routes, then the heading should be maintained until you have passed the last houses in Wellhead before making a left turn.

The head of the first arrows on the ‘West run routes’ diagram show the earliest point the turns can be commenced.

Care should be taken to avoid any low, steeply banked turns which could be adversely affected by the wind gradient, particularly on the NE approach.

Of all the runs available at Dunstable, taking off West and landing NE is potentially the most hazardous, especially so, if winch launching is taking place. Scan the scene early for potential problems and think about how you might deal with these events before they occur;

If a right hand circuit is in operation, then land as for the South West run and take care when crossing winch cables.

If you are landing on South West run, there are also many of the extra hazards as discussed above. Usually the landing and roll-out are completed before reaching the cables, but with light winds you may end up crossing the cables at some speed and the risk increases. Again take stock of the situation both visually and by monitoring the radio before you become committed to landing and if necessary be prepared to go around.

There are few problems with locating a grid on this run, the initial take-off routes should be maintained. However, see ‘Tow Out Patterns’ , SW example 3 and W example x, for optimum routings during grid launches.

The winch cables, regardless of run, should be wound in before the first grid launch.